These are predictions based on SunSign. To get your personalised prediction, as per your birth chart, Talk To Our Expert Astrologer. 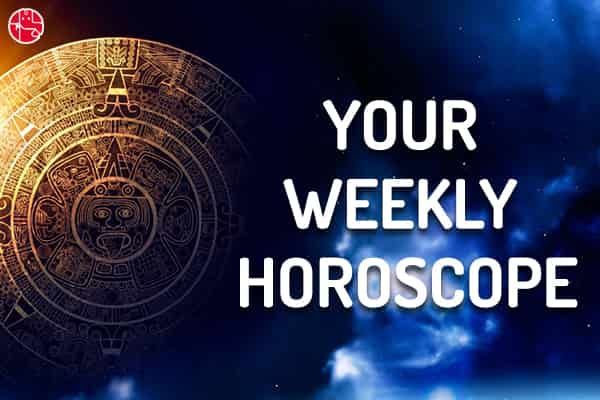 These are predictions based on SunSign. To get your personalised prediction, as per your birth chart, Talk To Our Expert Astrologer.

Aries ( 21st March to 20th April ) : Mars, the ruler of your Sign, will be in retrograde motion from Tuesday. It now moves backwards into its Sign of exaltation, Capricorn. And all this drama is happening in the 10th House, where another important planet is already retrograde. Brace yourself for a few challenges at the work front. There may be times, when you will work really hard, but may not obtain desired results; be patient. Wake up the fighter in you; put your best foot forward, be it in your career or personal life.

Taurus ( 21st April to 21st May ) : Leisure, fun and getting up close and personal with a special friend shall be on your mind, as the week begins. Ones interested in partying, flings, physical advances and new (albeit short-lived) romances shall be helped by the cosmic flavour. But, if you have something long-term on your mind – better clear it, right in the beginning, suggests Ganesha. On Tuesday, Mars (in retrograde mode) re-enters its Sign of exaltation, Capricorn – your 9th House. Now two major planets are in retrogression in your zone of fortune.

Gemini ( 22nd May to 21st June ) : The unrest in your family seems to continue this week too. You’ve tried hard to settle the matters but maybe you need to invest some more time in doing so. It’s better to try harder than getting bogged down by the situation. Mars re-enters its Sign of exaltation on Tuesday and will move retrograde in your 8th House. It is joining Saturn which is also retrograde in the 8th House. There is no doubt that you will be rather confused during this time.

Cancer ( 22nd June to 22nd July ) : Career seems to be your top priority this week. You are now eager to do something that will give your career a boost. Mars moves backwards and enters Capricorn, its Sign of exaltation, on Tuesday. Now, Saturn and Mars both are in retrogression in the 7th House, and this does not spell good times for long-term relationships. Inability to understanding each other may end in discords. Married couples may have to give each other a little space to ensure there is harmony in their relationship.

Leo ( 23rd July to 22nd August ) : Your family is whom you turn to when in need. This time around, it is your family that needs your support. Make sure you take care of all their needs even if it may not seem easy. Mars, which is believed to be the most favourable planet for the Lions, is moving in retrograde motion and will be re-entering Capricorn on Tuesday. It will remain exalted here. On the other hand, two major planets are transiting through the 6th House in retrograde mode.

Virgo ( 23rd August to 22nd September ) : This will be a good time to look within and accept that you are not perfect. No one is! So, give a good hearing to this person – in your friend or social circle – when he/ she attempts to give you some tips. Personality and skill development are areas, where you should invest time and energy. Over Tuesday, Mars re-enters Capricorn – your 5th House. Mars is in retrograde mode now. So, both Saturn and Mars traverse in retrogression in the zone of creativity, new romances, kids and new projects. Understandably, this is a crucial and forceful – seemingly intimidating – cosmic alignment.

Libra ( 23rd September to 22nd October ) : Endeavours like training, learning and development shall be scheduled for the early part of the week. As a business owner, you may spend money to train your staff. Over Tuesday, Mars (in retrograde mode) re-enters its Sign of exaltation Capricorn. Now, two strong planets move in retrogression, through your 4th House, and both have a direct aspect on your 10th House of Karma. Exalted Mars will make your forceful and aggressive, and will also present a new opportunity.

Scorpio ( 23rd October to 22nd November ) : You may remain busy exchanging views and discussing, with someone who holds an important place in your personal or professional life. While the topic may center around ways to enhance your prospects, the overall meeting shall be quite stimulating, promises Ganesha. Over Tuesday, the ruler of your Sign Mars (while moving in retrogression) re-enters Capricorn – your 3rd House. Mars becomes exalted here. Now, two major planets – Mars and Saturn – move in retrograde mode through your 3rd House.

Sagittarius ( 23rd November to 21st December ) : Occupation related matter will keep you busy this week. Over Tuesday, Mars – moving in retrograde mode – re-enters its Sign of exaltation – Capricorn -your 2nd House. Now, it joins Saturn (already retrograde). With two of these strong planets in retrogression in family and finances sector, you will have to exrcsie great care in these matters – for at least a fortnight now. These two will keep giving you confusing signals, as they are contradictory in nature. Mars is fiery and rash – and will propel you to be the same, while Saturn is cold and calculated.

Capricorn ( 22nd December to 20th January ) : With career on the top of your mind, you shall work harder to make progress. In business, you may find yourself busy trying to convince a worthy customer to sign a deal. On Tuesday, as Mars moves backwards and re-enters Capricorn, and with another important planet of a different culture also moving retrograde in this House, you might feel stuck. While Mars may encourage you to go ahead, Saturn may discourage you from taking risks or making bold, impulsive decisions.

Aquarius ( 21st January to 18th February ) : Feeling new enthusiasm, you will plan to go the extra mile this week. But, Mars may play a spoiler, as it becomes retrograde to re-enter Capricorn, its Sign of exaltation on Tuesday. With two major planets in retrograde mode in your 12th House (the House of expenses), you need to gear up to deal with some financial issues. Unwarranted expenses may pop up every now and then and your financial planning may go for a toss.

Pisces ( 19th February to 20th March ) : Romance is in the air! In fact, it’s more to do with the sparkling, sizzling physical chemistry that you may share with an admired one. Ones already in love relationships too may share an intense chemistry with their beloved. Yet, there may be something amiss, which may not let you enjoy the whole deal to the fullest. Are you anxious about something? For some time this planetary battle is to continue, so it would be best to find ways to relax and lighten the metaphorical load, you may be carrying, says Ganesha. Mid-week, the (now) retrograde Mars re-enters Capricorn – your 11th House, where it joins the already retrograde Saturn.

A consummate writer, an advertising professional for over 16 years, an active blogger on fashion, ramp, beauty and health; ex-visiting faculty on advertising and communications and a creative consultant, there is never an end to putting words that click. I love to create my own paths and today I am doing what I love doing the most. Fashion and writing has always been my area of interest and passion.

How one woman turned herself into an icon

Subscribe to our newsletter
Sign up here to get the latest news, updates and special offers delivered directly to your inbox.
You can unsubscribe at any time
Leave A Reply
Cancel Reply

How one woman turned herself into an icon